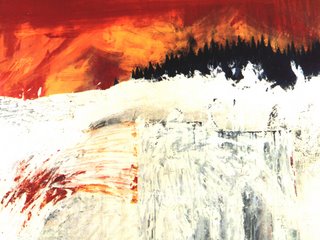 "Shadowing everything they’d done heretofore like a cold black monolith, Kid A was the ultimate encapsulation of a band held firmly in the grasp of the blue-steel g-forces of technology. One October day in 2000, Radiohead stripped their threads completely, and offered us this, an album consistently devoid of context and thus one that provides its own for the decade. In its dark-hued unfolding, we began to see ourselves as faint and flimsy and perhaps even glowing with the toxicity of our own immense need for progress, detached from ourselves and those around us via the depth of our future and the inevitability of its emergence. And, yet, this wasn’t mere detachment, a leap out of step with anything we’d come to learn from OK Computer. This was linear progression via spastic EKG line, as the band slipped free from both academic IDM and mournful Brit-rock. Kid A is restrained and chained in all the right places, and boiling with such a ragged distrust of us all and all that is in us that we can’t but claim its place in our own lore. We acknowledge the same awkwardness, and understand its isolation now. That is what they’ve forced us into. And that, above everything else, is why Kid A is the most important album we’ll see this decade". [Derek Miller]